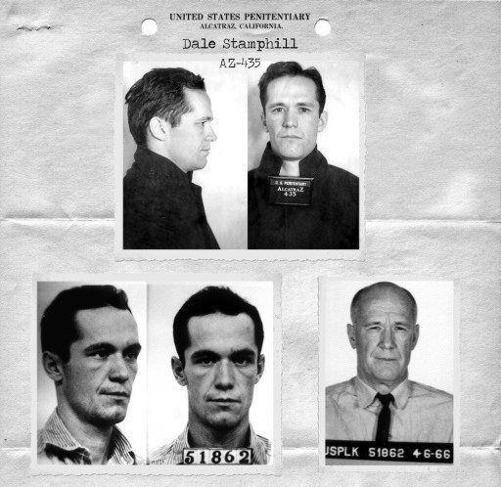 The last of the inmates who participated in the escape of 1939 was Dale Stamphill, born March 12, 1912. Stamphill was a habitual criminal serving a life sentence for kidnapping and robbery. On February 17, 1935, while serving time at the State Reformatory in Granite, Oklahoma, Dale and twenty-one other prisoners escaped after killing a tower guard. Then on February 27, 1935, Stamphill and two accomplices, W.L. Baker and Malloy Kuykendall, robbed the 1 stNational Bank in Seiling, Oklahoma, and kidnapped Dr. Fred Myers from his residence at gunpoint. Dr. Myers was forced to treat a hip injury that Kuykendall had received during the bank robbery, and then to drive the men to Grazier, Texas, with a shotgun trained upon him. The outlaws were captured by the police, and Stamphill was sentenced to life imprisonment on October 26, 1937. He was initially sent to Leavenworth, but then was transferred to Alcatraz on January 21, 1938, because of his escape history. 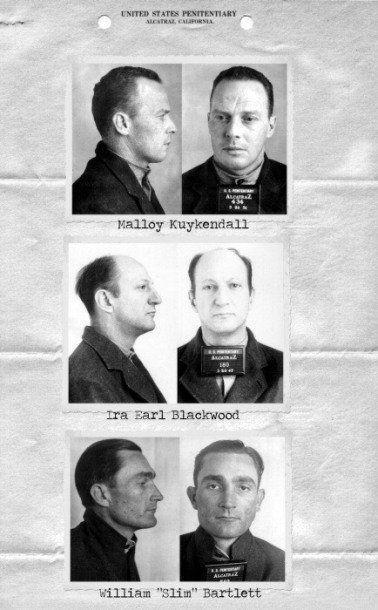 Malloy Kuykendall, Ira Earl Blackwood and Slim Bartlett. William “Slim” Bartlett was rumored to have a smuggled a bar-spreader device to Doc Barker.

In the autumn of 1938, several months before the escape, Barker started recruiting his accomplices and plotting a breakout from D Block. After striking deals with other inmates to have a hacksaw blade and makeshift bar spreader delivered to him in D Block, Barker worked on getting himself thrown into segregation. On October 30, 1938 Barker assaulted fellow inmate Ira Earl Blackwood while standing in line in the recreation yard waiting to file down to their work detail. Karpis later wrote that Ira had a reputation with most cons as a stool pigeon. Associate Warden E.J. Miller, nicknamed “Meathead” by the inmates, was on a month-long vacation, and Acting Deputy Warden C.J. Shuttleworth had Barker thrown into isolation for the full nineteen-day duration. After completing his time in isolation, Barker was moved to a standard segregation cell where he would remain until the escape.

D Block was one of the few areas besides A Block that had remained in its original state, just as it was when it was utilized during the military years. The cell bars were still of the flat soft iron type, with outward swinging door hinges similar to those found in A Block. The inmates would exploit this weakness to their advantage by using their hacksaw blade to saw methodically through the soft iron bars in sequence, filling the gaps with debris and paint to avoid detection. The bars that encased the windows of D Block were made of tool-proof alloys, and this would make gaining access an even greater challenge. A typical cell in D Block, prior to the 1940 remodeling. Note the flat soft iron bars.

The D Block area had not yet been walled off from the rest of the prison, which allowed for the easy transfer of contraband from inmates performing clean-up details and other assignments inside the main cellhouse. It was further rumored that inmate William “Slim” Bartlett, who apparently had worked as a machinist before being incarcerated, had requested permission to build a lap steel guitar. It was said that once it was completed, he smuggled the makeshift bar spreader into the main cellblock inside the guitar, so that another collaborator could pass it to Barker in D Block. The bar-spreader was in some respects similar to the device that would later be used by Bernard Coy in the 1946 escape attempt. It was small, consisting of two bolts with a cross thread, and if used in combination with a crescent style wrench, it could exert enough force to reposition and force apart the bar section.

Before the escape could be attempted, a few of the inmates would have to leave their cells and try to displace one the window bars, during a period when the guards would be performing duties in the main cell house. This was a risky undertaking, since they would have to leave their cells when noise levels allowed some degree of cover, also taking care not to be spotted by any of the custodial officers. During the early evening hours when the cellhouse inmates were herded into the dining room hall for dinner, two of the inmates left their cells to work on the window bars, while another went to act as a lookout, keeping an eye on the guard inside the gun gallery. The inmates manipulated a wrench to exert enough force against the bar, which snapped free from its foundation. Using putty and cement, they set the bar was back in its place to avoid raising suspicion. As the inmates worked, other prisoners around the cellhouse banded together to flush toilets and make various other subtle noises, in order to keep the guards from hearing the inmates working outside their cells in D Block. Once they were able to sneak back into their cells undetected, with the window bar prepared for easy removal, the inmates were ready to make their escape.

On the fog-laden morning of Friday the thirteenth at 3:00 a.m., the guard in D Block performed his customary counts of the inmates, thinking all of them to be asleep. At this hour there was only one guard on the cellhouse floor, and one in each gun-gallery. After the guard finished the count in D Block, he walked over to B Block and started his next round of counts. As soon as the path was clear, the escape accomplices bent out the lower bars of their cells, which they had been preparing for weeks, and made their way to the window. Karpis later wrote that Ty Martin was the first to climb through the window, and when his large shoulders became stuck, he hung helplessly attempting to squeeze through without making any noise. With Stamphill’s help he managed to painfully cram himself through the small opening and drop to the path eight feet below. After the five inmates had all made their way out of from the cellhouse, they stealthily hiked down to a small clearing at the water’s edge, and then started to gather wood, attempting to build a makeshift raft. The harsh waves pounded against the jagged rock forms as the men stripped down to their underwear, using clothing to tie the pieces of wood together.

By 3:30 a.m. the guard had started making another round, and he reached the disciplinary section at about 3:45. In a shocking discovery, he found one of the D-Block cells empty with the sheet stripped from the bed. He quickly ran to the administration phone and called the Armory, anxiously communicating the news of the escape. Minutes later, sirens and searchlights saturated the fog-shrouded island, and a quick phone call was placed to the Warden. Johnston quickly dressed himself and was met at the front door by Associate Warden Miller. Little information was available other than that the inmates had all been present during the 3:00 a.m. count. Captain Weinhold had been awoken, and he quickly reported to D Block. It was found that the five inmates, all of whom shared adjacent cells, had sawed through the bottom bars of each cell and were now missing. Meanwhile down by the water’s edge, as the sirens wailed in the distance, the inmates became separated and hurried to complete their improvised wooden rafts. 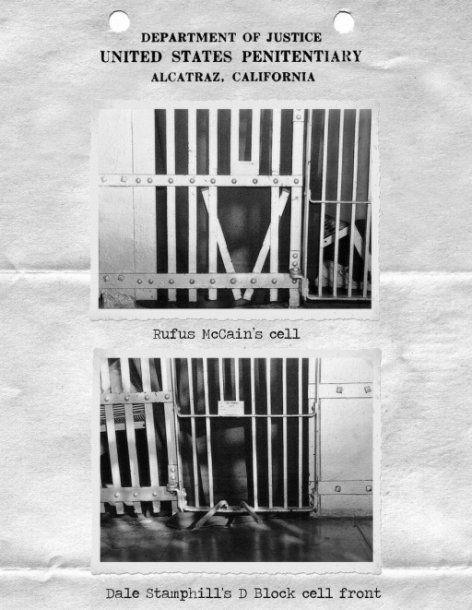 The fronts of Rufus McCain’s cell and Dale Stamphill’s cell following their escape. 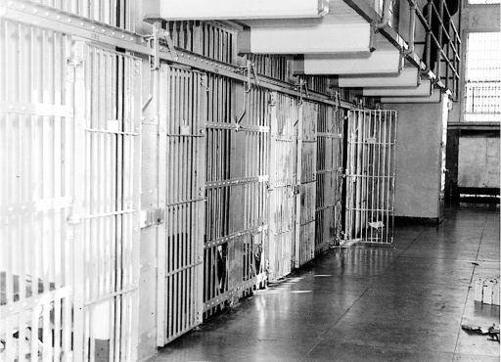 D Block as it appeared following the 1939 escape. Note the spread bars on one of the cell fronts. Also note the extended cell front toward the rear of the cellblock. This was one of the early closed-front solitary confinement cells.