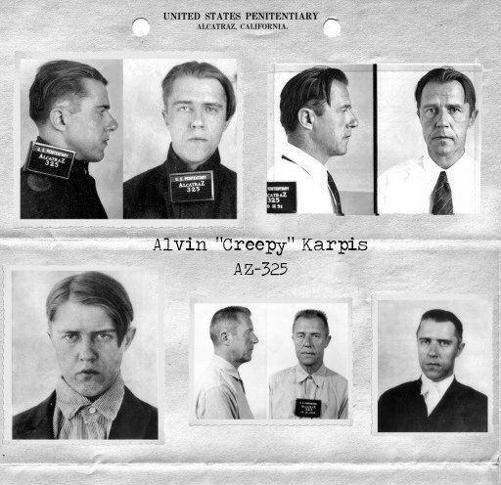 Alvin Karpowicz was born in Montreal, Canada in 1908, and his father moved the family to Topeka, Kansas when Alvin was still a young boy. It was an elementary school teacher who decided to shorten his name to simply Alvin Karpis and he would later be given the nicknames “Creepy Karpis” and “Old Creepy” by fellow inmates. Alvin would have the unique distinction of enduring a twenty-five year residence at Alcatraz (the longest term served on the Rock by any inmate) and he was designated as “Public Enemy Number One” by J. Edgar Hoover himself. He would live a quarter of a century in a place where he would never be allowed to walk astray and would never see many areas that were only a few yards from his cell. In his memoir published in Canada in 1980, Karpis claimed that his first encounter with crime had occurred when he stole a gun at only ten years of age. Like many other criminals of his day, his first arrest was for illegally hopping trains. He was sentenced to a Florida chain gang and after release he was again arrested for robbery. He subsequently escaped from prison and returned to his fugitive status.

Karpis joined the Barker gang after meeting Fred Barker in 1930 at the Kansas State Penitentiary in Lansing. Karpis and Fred had formed a close relationship in prison while working together in the coalmines. Karpis had made arrangements to buy himself an early release. Prisoners who worked in the mines were required to dig a specified amount of coal, and each day that they dug over their quota, they were given special “good time” credits that they could apply toward their release. Karpis paid other inmates to turn over their coal to him, which helped him to secure an early release in May of 1931. Only a month later, Karpis and Fred Barker were arrested for robbing a jewelry store. Both managed to pay restitution and were paroled.

Continuing their escapades in crime, on December 18, 1931 Karpis and Fred Barker robbed another store using a new 1931 DeSoto as their getaway car, and several witnesses were able to identify the vehicle. The following day an officer named C.R. Kelly was sent to investigate a sighting of the car at the Division Motor Company in West Plains, Missouri. Alvin and Fred had stopped there to have a flat tire repaired. When the officer approached the car to question the two occupants, Karpis opened fire on him, inflicting fatal gunshot wounds to the chest. Not long after the murder the two were identified, and on a tip from a witness Dunlop’s cottage in Thayer, Missouri was raided by the police. The fugitives had already fled, but the police discovered stolen merchandise from other robberies, and thus were able to identify the players.

Karpis was quickly accepted as one of the Barker family, and he almost seemed to replace Herman. Doc was released from prison in 1932, and as a condition of his parole, he was directed by authorities never again to return to Oklahoma. Once more the Barker gang went into full swing, pulling various bank and business heists. The family rented a house with Karpis and Dunlop at 1301 South Roberts Street in West St. Paul, Minnesota, but the landlady soon became suspicious on seeing them frequently entering and leaving the house carrying violin cases. Her son also recognized Fred Barker and Alvin Karpis from a detective magazine which featured a story about the killing of Officer Kelly. On April 25, 1932 the police raided the house, only to find that it had just been abandoned. The following morning, the body of Arthur “Old Man” Dunlop was found on the shores of Lake Frendsted near Webster, Missouri. Dunlop had been stripped of his clothing and shot three times at close range. Not too far away, the police found a bloodstained woman’s glove that was believed to belong to Ma Barker. The FBI later contended that Alvin and Fred had shot Dunlop to death, believing that he had been the one who tipped off the police.

The FBI had now started to close in on the Barker gang, which forced the outlaws to flee to Kansas City. Karpis posed as one of Ma’s sons, and the family bought a luxury home in an exclusive residential district known as Country Club Plaza. They attempted to masquerade as an upstanding family that worked in a successful insurance firm. The men ultimately teamed up with convicts Francis Keating, Thomas Holden, and Harvey Bailey (later an accomplice of “Machine Gun” Kelly), who had all escaped from Leavenworth Penitentiary. Another accomplice was Bernard Phillips, a corrupt police officer who had become a professional bank robber. The family started to move from one location to another, attempting to evade the FBI. On July 7 ththe FBI apprehended Bailey, Holden and Keating while they were playing golf at the Old Mission Golf Course in Kansas City. Phillips was also with the men, but he happened to be inside the country club, and watched from afar as the others were handcuffed and shoved into law enforcement vehicles. Phillips carried the news back to the gang, and Alvin and Fred quickly packed their belongings and fled. When the FBI raided the apartment they found cooked meals on the table, indicating an unplanned and rapid departure.

In July of 1932 Karpis, Phillips, Fred and Ma Barker, and another accomplice named Jess Doyle fled together from Kansas City to White Bear Lake in Minnesota, where they rented a summer cottage in a small resort. The gang maintained a low profile with the exception of frequenting a small nightclub called the Hollyhocks, which was owned by an associate named Jack Peifer. Their crime spree continued with a daring daylight robbery of the Cloud County Bank in Concordia, Kansas, where they secured over $240,000 in bonds and thousands of dollars in cash.

The family paid for the services of a private detective named Jack Glynn to help negotiate the release of Doc, who was imprisoned at Leavenworth at the time. Glenn conducted independent investigations, and managed to win Doc’s release on September 10, 1932. Glynn had also attempted to achieve the release of Lloyd Barker, who was likewise imprisoned at Leavenworth. But the authorities were unmoved by Glynn’s attempts, and denied Lloyd’s appeal. Doc spent a short time visiting with his father and a small stint attempting to make an honest living as a glass blower, and then reunited with Ma and the others back in Minnesota. Volney Davis was also successful in getting paroled, and he soon joined up with Doc.

On December 16, 1932 the Barker-Karpis Gang robbed the Third Northwestern Bank of Minnesota, and the violent aftermath left one bystander and two police officers dead in a hail of machine gun bullets. The gang had thought that the bystander was attempting to get their license plate number, and had therefore shot him to death. Gang member Larry DeVol was captured, and he was found to have $17,000 in his possession from the Third Northwestern Bank robbery. The others took flight once again, this time making their way to Reno, Nevada, where they stayed for only a short period.

The reign of terror would continue as the Barker-Karpis Gang raged through the Midwestern States, eventually ending up in Chicago, where they murdered another police officer. The gang split up and kept separate residences, Ma living on the exclusive South Shore Drive, and Alvin cohabiting with Dolores Delaney, the sister-in-law of Pat Riley, a mobster from the Dillinger Gang. In 1933 the Barker-Karpis Gang had returned to St. Paul and was keep a low profile while they began to meet and plan the kidnapping of William A. Hamm, Jr., the President of Hamm’s Brewing Company. On June 17, 1933 the gang abducted Hamm, demanding a $100,000 ransom from his family and threatening his certain death if they tried to involve police. The ransom money was paid two days later and Hamm was released unharmed.