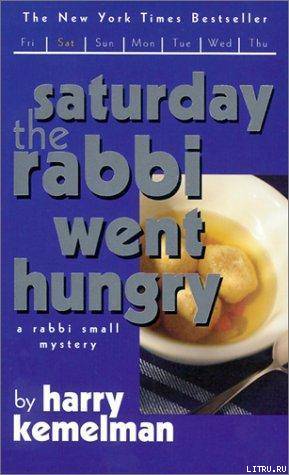 The second book in the Rabbi Small series, 1966

The Creation of Rabbi Small

A Special Foreword by Harry Kemelman

I was born and grew up in a Jewish neighborhood in Boston. We moved several times, but always to a Jewish neighborhood, that is, one which had enough Jews to support a Jewish butcher shop and a Jewish grocery where you could buy herring and hard-crusted rye bread rather than the wax-wrapped loaf advertised as “untouched by human hand” (understandably) that was sold in the chain stores. These had to be within walking distance of one’s home. Few people had cars in those days, and even those were stored in a garage for the winter since streets were not plowed, only sanded. Any area that could support these two was also able to sup-port a shul or a synagogue.

I stayed out of school for every Jewish holiday, accompanying my father to the synagogue, mumbling the required passages as fast as I could but never as fast as my father. He would recite the Amidah and sit down before I was halfway through, even though I skipped a lot. During the High Holidays, when the synagogue was jammed, I would say I was going up to the balcony to see my mother, and then skip out and play with the other youngsters, and later when I was a teenager, stand around and flirt with the girls.

Although everyone in the congregation recited the passages in Hebrew, only a few knew the meaning of the words they were saying.

We did not pray, at least not in the sense of asking or beseeching. We davened, which consisted of reciting blessings expressing our gratitude, reading passages from the Bible and the Psalms. What petitionary prayers there were, were for the land of Israel and for the Jewish nation as a whole. It is perhaps simplistic, but nevertheless indicative, that our equivalent of “Give us this day our daily bread” is “Blessed art thou, O Lord, for bringing forth bread from the earth.”

Fifty years ago, I moved to the Yankee town that I have called Barnard’s Crossing in my books, where the few Jews in the area had decided to establish a synagogue. Of necessity, since there were so few of us, it was set up as a Conservative synagogue so that the few older members who were likely to be Orthodox on the one hand and the Reform on the other, would not feel the service too strange. In point of fact, most of them knew little or nothing of their religion. They were second and third generation Americans; their parents had received little from their immigrant parents and passed on even less to their children. Only one or two of the older Orthodox members kept kosher homes.

They knew about religion in general from their reading or from the movies they had seen, but little or nothing of the tenets of Judaism. Typical was the reaction of the young lawyer who had asked the rabbi they had engaged to bless the Cadillac he had just bought. He was surprised and hurt when the rabbi refused and said he did not bless things. The friends in the synagogue whom he told of the rabbi’s refusal felt much the same way.

I was fascinated by the disaccord between the thinking of the rabbi and that of the congregation, and the problems it gave rise to. So I wrote a book about it. My editor, Arthur Fields, thought the book too low-keyed and suggested jokingly that I could brighten it up by introducing some of the exciting elements in the detective stories that I had written. As I passed by the large parking lot of our synagogue it occurred to me that it was an excellent place to hide a body. And as a rabbi is one who is learned in the law and whose basic function is to sit as a judge in cases brought before him, it seemed to me that he was the ideal character to act as an amateur detective by searching out the truth. Thus was born Rabbi David Small.

On the tenth day of this seventh month is the day of atonement, a holy convocation shall it be unto you, and ye shall fast… and no manner of work shall ye do on this day… it shall be a statute forever throughout your generations in all your dwellings. A sabbath of rest it shall be unto you, and ye shall fast: on the ninth day of the month at evening shall ye begin, from evening unto evening shall ye celebrate your sabbath.

This year the Day of Atonement coincided with the weekly Sabbath, so that the ninth day of the month in the Hebrew calendar fell on a Friday and the tenth on Saturday. It did not make the day any holier-that was impossible-but it enabled most Jews to observe the holiday without interrupting their normal work week. Late Friday afternoon the Jewish community of Barnard’s Crossing, like Jews everywhere, was making ready for this most holy day of the year. The women were preparing the evening meal, which traditionally was more elaborate than usual not only to set off more sharply the twenty-four-hour fast that followed but to give the sustenance needed to endure it. The men had left work early to give them time to bathe, change into holiday clothes, dine, and still get to the synagogue before sundown when the chanting of Kol Nidre ushered in the Holy Day.

David Small, the young rabbi of the community, had finished dressing and now stood for inspection in front of the critical eye of his wife, Miriam. He was of medium height, but although in excellent health he was thin and pale, and behind his glasses his eyes were dark, deep-set, and brooding. He carried his head slightly forward as though peering at a book; his shoulders had a scholarly stoop.

His wife was tiny and vivacious with a mass of blonde hair that seemed to overbalance her. She had wide blue eyes and an open, trusting countenance that would have seemed ingenuous were it not offset by a determined little chin. There was a certain childlike quality about her that not even the protuberant belly marking her final month of pregnancy could dispel.

“Your suit, David-the jacket doesn’t hang right some-how. Stand up straight and throw your shoulders back.”

He made the effort.

“It’s that top button. It’s a good half inch off and pulls the lapel askew.”

“It fell off and I sewed it on myself. You were at a Hadassah meeting.”

“Well, give it to me and I’ll resew it.” She examined the button critically. “Why did you use blue thread when the suit is gray?”

“Actually it’s white thread. I colored it with my fountain pen. Besides, my kittel will cover it during services.”

“And what about on the way to the temple? And talking to the members afterward? And your shoes are dusty.”

He started to rub his shoe against the calf of his trouser leg.

“They’ll only get dusty again when we walk to the temple,” he said apologetically.

“Use the shoe brush.”

He uttered a faint sigh of protest but went to the back hallway, and presently she heard sharp staccato whisks.

When he returned she helped him on with his jacket, adjusting the set on his shoulders like a tailor, and then buttoned it. She patted the front of the jacket. “There, that looks better.”

“Then we’d better get on with it.” From his wallet he extracted two one-dollar bills and gave her one and kept one for himself. Automatically he started to return the wallet to his back pocket, then thought better of it and went inside and put it away in his bureau drawer. He did not carry money on the Sabbath.

He came back with a prayer book in hand. Flipping the pages with index and second fingers, he found the place and handed her the open book. He pointed. “There’s the prayer.”