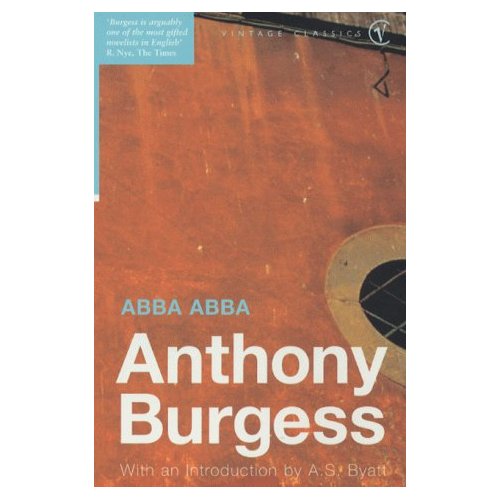 I would reject a petrarchal coronation – on account of my dying day, and because women have Cancers.

Anthony Burgess's novels often seem to be a tussle with the art of poetry. His costive poet, Enderby, grinds out in the lavatory poems of metaphysical grim wit which turn out to be Burgess's own early work, at least in part. Enderby embarks on epics about the conflict between St Augustine and the heretical Celt, Pelagius. The Clockwork Testament, or Enderby's End plays a wildly funny film-script of G. M. Hopkins's The Wreck of the Deutschland across the illiterate transcription of a television chat show by a hopelessly defeated Californian secretary. Burgess's novels about Shakespeare and Marlowe are shot through with overt and covert quotations from the works of those – and other – dramatists. He was given to chiding his reviewers and readers for not noticing complicated musical forms encoded in his works. As he grew older he came to doubt that his readers would any more have the familiarity with the body of poetry in English he took for granted. But even if we cannot recognise everything we can respond to the furious susurration of other vocabularies and rhythms, the counterpoint, the polyphony.

Why did he do it? He described himself, modestly enough, as a maker of verse rather than poetry. He wrote libretti, and a splendid translation of Cyrano de Bergerac, complete with murderous sonnets. He was a trained linguist, and thought technically about sounds and rhymes in a way most novelists don't. He was driven to manic punning and word-play in the same way as his hero Joyce, and Melville, perhaps, another novelist who kept breaking into verse and parody. He took English poets and poetry as his subject, he said himself, partly because, as an Englishman living in Europe, the language and the literature were his national identity. He didn't know "Thatcher's Britain" well enough to anatomise or attack it. He knew the poets – and he used, taking pride in his identity as a professional writer, to make novels about them to coincide conveniently with their centenaries. A centenary is a technical constraint and challenge like others. He rose to the occasion.

He used also to say that he was a European writer not only because he lived in Monaco, or Italy, with an Italian wife, but because he was an English Catholic of Irish descent, and the Roman church, and the Latin language, united the histories and crossed the frontiers, of all European countries. The subject matter of Catholic literature was good and evil, heaven and hell, time and eternity. The English novel tended to be about the English class system, which Burgess was interested in, as he was interested in everything, but glad – as a novelist and constructor of mock-epics – to escape.

There were two Anthony Burgesses, perhaps. One was atheist, English, northern, and interested in the quiddities of the demotic. The other was Catholic, Irish, Latin, and interested in the spiritual life. You find them to a certain extent in the harsh North African Augustine, convinced of predestined bliss or bane, and the British monk, Pelagius, desperately arguing for free will, and human salvation by virtue. You find them also in the two opposed heroes of Earthly Powers, the mild, cowardly, Coward-like professional writer, brother of a versifying music-hall artist, and Carlo, the exorcist Pope, working miracles of salvation and damnation on the cosmic and historical stage. Or you find them, the elements recombined, in the two poets of Abba Abba, Giuseppe Gioacchino Belli and John Keats.

In You've Had Your Time, which Burgess, following St Augustine again, describes as "the second part of the Confessions of Anthony Burgess" he describes an unpleasant experience he defines as "psychic". He was asked, he says, to read some of Keats's poems at the house on the Spanish Steps where he died.

"Reciting the odes, I became aware of a kind of astral wind, a malevolent chill, of a soul chained to the place where the body died, of a silent malignant laughter that mocked not my reading but the poems themselves."

On another occasion, making a television film for Canada, he recited Keats's sonnet "When I have fears that I may cease to be" on the steps outside that house. During the fourteen lines a clear sky became stormy, rain poured, thunder drowned the words. Burgess says he is not "imputing a demonic vindictiveness" to the soul of John Keats, but believes that his fierce creative energy, frustrated by death, haunts the house where he died. He goes on to speculate that if Keats had lived, as Belli did, to the age of 72, he might have moved from his "consumptive romanticism" to a fuller poetry, "doing Browning's work better than Browning". Burgess perhaps admired the Keats of the letters, witty, wise beyond his years, Shakespearean in his quick intelligence, more than the singer of Endymion, the post-Miltonic author of the unfinished Hyperion, or even the dreamy singer of the great Odes.

However Burgess is very clear that the novel, Abba Abba, which recounts briefly and economically the death of Keats, sprang more from an obsession with the Roman poet, Giuseppe Gioacchino Belli. Belli died in 1861, at 72 – he could have met Keats in Rome, though there is no evidence that he did. He was the author of 2,279 sonnets in the Roman dialect, and the sonnets were blasphemous, obscene and according to Burgess full of scholarly curiosity about their own language. He was also a Vatican censor, a double man, like Burgess himself, in some ways. Burgess quotes the American poet, Robert Penn Warren, who said that the great nineteenth-century poets were Keats and Belli. Burgess began translating Belli's sonnets before he conceived his Keats novel – indeed, significantly, whilst he was working on his translation of the amorous sonnets of Cyrano de Bergerac. In the end Burgess translated "seventy-odd" of the sonnets. Liana Burgess pointed out to me that he translated them into a Manchester voice, an English version of the harsh, guttural Roman Italian. He confined himself to the theological ones that "gave full scope to the employment of the blasphemy of the Roman gutters". He speculates in his Confessions that Keats, if he had lived, might have learned to employ the colloquial, the obscene, the blasphemous. Like Belli.

Burgess's Keats, too, has things in common with his inventor. He was told in 1960 that he had an inoperable brain tumour and a year to live. He began writing novels to make money for his widow-to-be (his first wife Lynne) and wrote fluently and furiously under the pressure of the death sentence. Burgess's Keats is young, of a poor family, and a resolute atheist who believes that his end is final. He is also a European – he speaks at the beginning of the novel of the god, his god, Apollo, and his classical learning gives him the breadth Burgess's own education gave him. Burgess uses Keats's sonnet on a cat, with its spitting consonants and material solidity, to excellent effect – and he uses the voice (one of Keats's voices) of restless, mocking punning which recurs in the light poems and the letters. The wonderful scatological bravura passage from Burton's Anatomy of Melancholy which Burgess's Keats recites to cheer his friend Elton is in fact quoted at length by Keats in a letter to George and Georgiana Keats. Both the cat sonnet and the Burton quotation have a roughness and a force in common with Burgess's renderings of Belli.