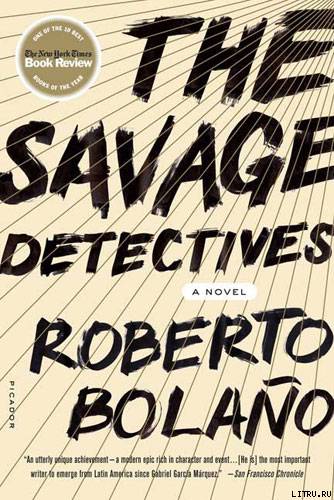 Translated From The Spanish by Natasha Wimmer

For Carolina López and Lautaro Bolaño,

who have the good fortune to look alike

I've been cordially invited to join the visceral realists. I accepted, of course. There was no initiation ceremony. It was better that way.

I'm not really sure what visceral realism is. I'm seventeen years old, my name is Juan García Madero, and I'm in my first semester of law school. I wanted to study literature, not law, but my uncle insisted, and in the end I gave in. I'm an orphan, and someday I'll be a lawyer. That's what I told my aunt and uncle, and then I shut myself in my room and cried all night. Or anyway for a long time. Then, as if it were settled, I started class in the law school's hallowed halls, but a month later I registered for Julio César Álamo's poetry workshop in the literature department, and that was how I met the visceral realists, or viscerealists or even vicerealists, as they sometimes like to call themselves. Up until then, I had attended the workshop four times and nothing ever happened, though only in a manner of speaking, of course, since naturally something always happened: we read poems, and Álamo praised them or tore them to pieces, depending on his mood; one person would read, Álamo would critique, another person would read, Álamo would critique, somebody else would read, Álamo would critique. Sometimes Álamo would get bored and ask us (those of us who weren't reading just then) to critique too, and then we would critique and Álamo would read the paper.

It was the ideal method for ensuring that no one was friends with anyone, or else that our friendships were unhealthy and based on resentment.

And I can't say that Álamo was much of a critic either, even though he talked a lot about criticism. Really I think he just talked for the sake of talking. He knew what periphrasis was. Not very well, but he knew. But he didn't know what pentapody was (a line of five feet in classical meter, as everybody knows), and he didn't know what a nicharchean was either (a line something like the phalaecean), or what a tetrastich was (a four-line stanza). How do I know he didn't know? Because on the first day of the workshop, I made the mistake of asking. I have no idea what I was thinking. The only Mexican poet who knows things like that by heart is Octavio Paz (our great enemy), the others are clueless, or at least that was what Ulises Lima told me minutes after I joined the visceral realists and they embraced me as one of their own. Asking Álamo these questions was, as I soon learned, a sign of my tactlessness. At first I thought he was smiling in admiration. Later I realized it was actually contempt. Mexican poets (poets in general, I guess) hate to have their ignorance brought to light. But I didn't back down, and after he had ripped apart a few of my poems at the second session, I asked him whether he knew what a rispetto was. Álamo thought that I was demanding respect for my poems, and he went off on a tirade about objective criticism (for a change), a minefield that every young poet must cross, etc., but I cut him off, and after explaining that never in my short life had I demanded respect for my humble creations, I put the question to him again, this time enunciating as clearly as possible.

"Don't give me this crap," said Álamo.

"A rispetto, professor, is a kind of lyrical verse, romantic to be precise, similar to the strambotto, with six or eight hendecasyllabic lines, the first four in the form of a serventesio and the following composed in rhyming couplets. For example…" And I was about to give him an example or two when Álamo jumped up and cut me off. What happened next is hazy (although I have a good memory): I remember Álamo laughing along with the four or five other members of the workshop. I think they may have been making fun of me.

Anyone else would have left and never gone back, but despite my unhappy memories (or my unhappy failure to remember what had happened, at least as unfortunate as remembering would have been), the next week there I was, punctual as always.

I think destiny brought me back. This was the fifth session of Álamo's workshop that I'd attended (but it might just as well have been the eighth or the ninth, since lately I've been noticing that time can expand or contract at will), and tension, the alternating current of tragedy, was palpable in the air, although no one could explain why. To begin with, we were all there, all seven apprentice poets who'd originally signed up for the workshop. This hadn't happened at any other session. And we were nervous. Even Álamo wasn't his usual calm self. For a minute I thought something might have happened at the university, that maybe there'd been a campus shooting I hadn't heard about, or a surprise strike, or that the dean had been assassinated, or they'd kidnapped one of the philosophy professors. But nothing like that was true, and there was no reason to be nervous. No objective reason, anyway. But poetry (real poetry) is like that: you can sense it, you can feel it in the air, the way they say certain highly attuned animals (snakes, worms, rats, and some birds) can detect an earthquake. What happened next was a blur, but at the risk of sounding corny, I'd say there was something miraculous about it. Two visceral realist poets walked in and Álamo reluctantly introduced them, although he only knew one of them personally; the other one he knew by reputation, or maybe he just knew his name or had heard someone mention him, but he introduced us to him anyway.

I'm not sure why they were there. It was clearly a hostile visit, hostile but somehow propagandistic and proselytizing too. At first the visceral realists kept to themselves, and Álamo tried to look diplomatic and slightly ironic while he waited to see what would happen. Then he started to relax, encouraged by the strangers' shyness, and after half an hour the workshop was back to normal. That's when the battle began. The visceral realists questioned Álamo's critical system and he responded by calling them cut-rate surrealists and fake Marxists. Five members of the workshop backed him up; in other words, everyone but me and a skinny kid who always carried around a book by Lewis Carroll and never spoke. This surprised me, to be honest, because the students supporting Álamo so fiercely were the same ones he'd been so hard on as a critic, and now they were revealing themselves to be his biggest supporters. That's when I decided to put in my two cents, and I accused Álamo of having no idea what a rispetto was; nobly, the visceral realists admitted that they didn't know either but my observation struck them as pertinent, and they said so; one of them asked how old I was, and I said I was seventeen and tried all over again to explain what a rispetto was; Álamo was red with rage; the members of the workshop said I was being pedantic (one of them called me an academicist); the visceral realists defended me; suddenly unstoppable, I asked Álamo and the workshop in general whether they at least remembered what a nicharchean or a tetrastich was. And no one could answer.